Decades before the U.S. government did the same, the German government during the 1930s launched a strong anti-smoking campaign.

But if you’re white and don’t display hate for your race? Nazi! Nazi! Nazi!

If you’re white and don’t support White Genocide by mass third world immigration and forced integration/assimilation in EVERY white country and ONLY in white countries, you’re a naziwhowantstokillsixmillionjews!

When anti-whites call you “Nazi” because you don’t support White Genocide, then educate the whites who are watching by replying with this truth:

“‘Nazi’ is an anti-white slur that anti-whites hide behind while carrying out White Genocide.”

Not only does that bring the topic back to White Genocide, it also helps spread the previously absent term “anti-white.”

The charge of “Nazi” is one of several that rely on relentless anti-white presentations of history by our schools and media that teach whites to hate themselves and to support White Genocide.

When anti-whites use history to justify White Genocide, reply with this truth, for the benefit of whites who are watching:

We don’t need to become scholars and harangue our white audiences with critiques of anti-whites’ versions of history (why would we expect an audience that’s not very knowledgeable about history to accept our account as more accurate than our enemy’s?) — that just leads to endless argument. But an audience that knows nothing does know that nothing justifies genocide. Our job is to show, to all whites who are watching, that the anti-white does in fact support White Genocide, whatever the anti-white’s justification for White Genocide is. Nothing justifies genocide.

ALWAYS BRING IT BACK TO WHITE GENOCIDE!

Okay, let’s get to the news item this article is supposed to be about, which not only shows how anti-whites use the Nazi narrative to justify White Genocide, but also shows what a government that cares about its people, as Viktor Orban’s government in Hungary does, can actually do to maintain that people.

In April 2018, the day before he was reelected Prime Minister of Hungary by a large margin, Viktor Orban was interviewed by the Hungarian daily Magyar Idők:

“…the defence of the country and the fight against migration form the core of our message.

“…we will maintain our current standpoint and declare that Hungary belongs to the Hungarian people, and that we alone have the authority to decide whom we wish to live alongside. In other words, whether or not we will be an immigrant country.”

“As Prime Minister of Hungary I built the border fence, defended the border and in Brussels rejected the resettlement of immigrants. But the danger has not yet passed: it is still hammering on our door. Tomorrow we must decide on Hungary’s next few decades; and if we make a mistake, we will not be able to correct it later.”

“George Soros finances a network. This network has enormous influence among Brussels [i.e. European Union] decision-makers. He also finances a great many media outlets and organisations, and these work in coordination to urge for policies throughout Europe which would facilitate and increase immigration…opposition politicians accept funding from George Soros, who employs thousands of people in Hungary and spends millions of dollars on shaping Hungarian politics.”

Hungary’s border barriers have been very successful in keeping illegal aliens out of Hungary.

In his State of the Nation Speech on February 10, 2019 Hungary’s PM Viktor Orban announced provisions of a new Family Plan that will greatly incentivize an increase in native Hungarian children.

“This is Hungary’s answer to challenges, rather than immigration,” and “The target countries for migrants are witnessing the emergence of a Christian-Muslim world with a shrinking rate of Christians. But we, central Europeans, still have a future of our own.”

Here are some of the new provisions (“HUF” seems to be in effect equivalent to the Hungarian unit of currency, the forint, and 1 forint = .0036 dollars, so 1 million forints = $3,600. Cost of living in Hungary is considerably lower than in the U.S.):

Every woman under the age of forty who gets married for the first time will be eligible for a preferential loan of up to HUF 10 million…If a third child is born, the remaining debt will be cancelled in its entirety.

Women who have given birth to and raised four or more children will be exempt from personal income tax for the rest of their lives.

The Government will provide families raising at least three children with a non-repayable grant of HUF 2.5 million for the purchase of new cars with at least seven seats.

Those are lifted from the Hungarian government’s summary in English of Orban’s State of the Nation speech, and the whole summary is very worth reading:

Hungarians once again have confidence in their future

Here’s Orban’s speech in its entirety if we have any readers of Hungarian:

Annika Strandhall, the Social Democratic minister for social affairs in far away Sweden, for some reason felt impelled to respond to the speech, and took out her “Nazi! Nazi! Nazi!” club and bashed Orban over the head with it. 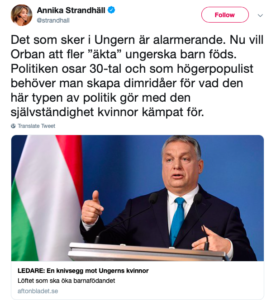 Translation of tweet (First two sentences are from Microsoft twitter translation, the third is from The Local):

“What is happening in Hungary is alarming. Now, Orban wants more ‘genuine’ Hungarian children to be born. This kind of policy reeks of the 1930s and will harm the autonomy for which women have struggled for decades”

Honestly, folks, we occasionally do the News mainly in hopes of getting your attention for a moment to encourage you to help us hammer the fact of White Genocide into the public domain:

But Viktor Orban, like Matteo Salvini in Italy, does deserve our notice and gratitude, and both of those gentlemen are good for our morale.

But why indeed does a minister in Sweden feel it necessary to bash the Prime Minister of Hungary with her “Nazi! Nazi! Nazi!” club for not opening Hungary’s borders to “diversity”?

Because anti-whites intend no country, no town, no school, no organization to remain white. Spread that truth:

Thank you! Click on the billboard to watch a News video about it.

Hungary and Viktor Orbán say “NO!” to White Genocide!

Thank you, Viktor Orban and Hungary, for showing us how to stop White Genocide!

Portland City Council Hears Resolution Condemning White Supremacy, unanimously passing it as they were EXPECTED to
The Stop White Genocide Party – a lesson in electoral politics