War On Whites, We Do What Works

You know that iconic clock that counts down each year on the eve of the New Year….. well someone has made an image look like that and it’s called “White Clock”. It depicts the dwindling amount of whites in America vs the fast paced growth of non-whites. 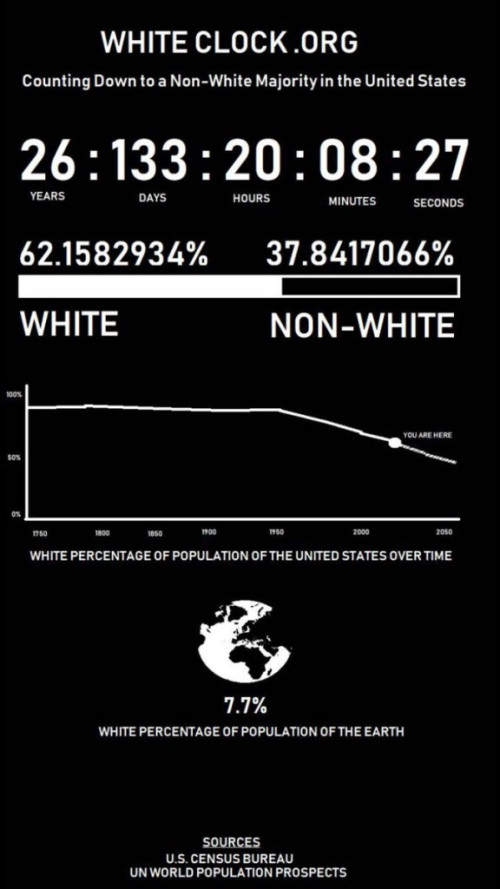 But we’ve heard this umpteen times before, right, that Whites will be a minority in 2050 etc etc but every time it’s mentioned nobody bats an eye.

Now let’s imagine just for a moment that there was a clock representing the disappearance of the Japanese people and that it was frequently quoted that they were to become a minority in their own country. It seems strange, right? Wouldn’t you feel on some human level that there’s something wrong with this scenario? Would you feel like asking the Japanese why they’re letting themselves be counted down until there’s no more Japanese left?

The White Clock image is an alarming reminder that our race is fast approaching extinction and this path to extinction isn’t happening by accident. It is straight up GENOCIDE.

It is a deliberate attack on Whites to bring about the destruction of Our race. Here is the definition of Genocide by the 1948 UN Genocide Convention:

The Convention defines genocide as any of the following acts committed with  “intent to destroy, in whole or in part, a national, ethnical, racial, or religious group, as such”
a. Killing members of the group;
b. Causing serious bodily or mental harm to members of the group;
c. Deliberately inflicting on the group conditions of life calculated to bring about its physical destruction in whole or in part;
d. Imposing measures intended to prevent births within the group;
e. Forcibly transferring children of the group to another group.

This deliberate attack on Whites is happening via massive non-white immigration into EVERY White country and ONLY into White countries. It is being led by the anti-white leaders in power. And this attack is set to destroy Our race in whole via assimilation.

These anti-whites push for more “diversity” & “multiculturalism” where there are too many White people. We’ve recently seen the state of New Hampshire as a whole push to make the state more “diverse” aka non-white because it is “too white”.

“Diversity” is chasing down white people and there can be no escape and no opposition.

We need to call these people out. IT is NOT OK to be anti-white!

This “White Clock” shows us we can wait no longer to stand up and fight back against this anti-white politically correct system.

Pointing out simple truths over and over enables people to agree on those truths and easily repeat them.

Check out our responses to anti-whites – Responding to Anti-whites.

The people, the masses have the power. By changing the discourse and pointing out simple truths we can change the mass consensus. This is where the power is.

A predicted white minority in EVERY white country IS White Genocide.

It’s time to SPEAK UP! Point out that “Diversity” is CHASING DOWN white people and that White self hatred is SICK!