“White Genocide” professor George Ciccariello-Maher has dropped his ambition to be appointed Chairman of Drexel University’s proposed Department of Applied Anti-Whitism, deciding that he could better support his core American value of chasing down whites with diversity* by resigning from Drexel.

“After nearly a year of harassment by right-wing, white supremacist media outlets and Internet mobs, after death threats and threats of violence directed against me and my family, my situation has become unsustainable. Staying at Drexel in the eye of this storm has become detrimental to my own writing, speaking, and organizing.” 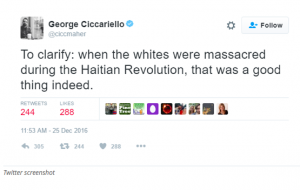 Pro-whites are fired if they openly oppose White Genocide, whereas Ciccariello voluntarily resigned because of reactions (if those reactions aren’t staged hoaxes, as so many allegations by anti-whites are) to his support of a white genocide in Haiti, as well as his other remarks against whites. BIG difference!

But I forget — we love Prof Ciccariello!

His fame began with his notorious tweet in late 2016, “All I want for Christmas is White Genocide.” That tweet and his subsequent statements helped spread the White Genocide meme so much that he was named “Most Helpful Anti-White” by the staff of fightwhitegenocide.com.

In 2018, we expect Prof Ciccarillo to do even better, and to walk away with our coveted “Diversity is a code word for White Genocide” award.

But let’s give Prof Ciccarillo a big hand right now, as he leaves the post in which he’s done such wonderful work for us (as by his Haiti tweet above), demonstrating that 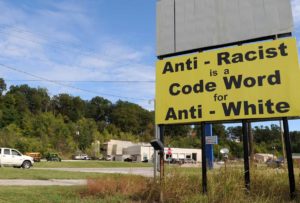 *“What they call diversity actually means ‘chasing down white people.’ That’s all it means. If you can come up with any example where diversity does not mean ‘We have found some White people, chase ’em down, bring in minorities…’   ‘Diversity’ is always talking about ‘too many White people.’” — Bob Whitaker

March of the Stop White Genocide memes!
Shifting Professor George Ciccariello-Maher to a new location, as if he’s a pedophile priest, Our Most Holy Church of Anti-Whiteism sets him among fresh White prey at NYU