“Camp of the Saints” White Genocide Caravan approaches through Mexico 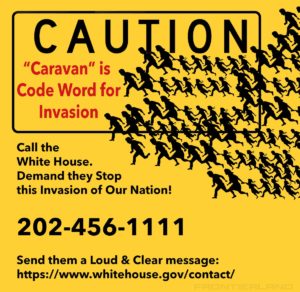 This excellent graphic is from another site. Phone lines at the White House have been swamped, so use this online contact form if they still are. Trump has made at least one tweet about the “caravan.”

The accurately prophetic novel “The Camp of the Saints” was written by a prominent French author and published in 1973. The novel’s frightening look at a future that’s now arriving was certainly remembered by many pro-whites when this small caravan of 1350 third-worlders was recently reported making its way through Mexico toward our southern border.

It’s only 1350 persons, just as an initial small flurry of snow is only the beginning of a blizzard.

But a group marching openly toward our border while publicly proclaiming the righteousness of its goal is a significant change in the sneak-in-if-you-can (but try again if you can’t) style in which the third world has been allowed in recent decades to flood into the U.S. through our southern border. This present group, like the smaller groups and the individuals who have come before them, expect correctly that when they arrive they will be granted some kind of entry, with at the very least the opportunity to try again if they are returned to the non-U.S. side of the border.

A nation obviously has the right to protect itself from invading hordes. What will likely be needed soon if not already is an arrangement comparable at least in serious intent to the border arrangements the former East Germany had during the Cold War. That Communist country very effectively kept its citizens in its territory with double walls and fences with a no-man’s land in-between that was mined and under rifle fire.

The kind of assault represented by this small column now approaching our border could grow momentously very quickly, and our country is obviously not prepared for that. Not prepared militarily at the border, and not prepared morally anywhere, since nearly every institution of our country has been commandeered by anti-whites who openly call for White Genocide, calling it “diversity.”

Anyone who hasn’t read “The Camp of the Saints” may want to. Look for it mis-shelved under “fiction.”

When does compassion become white self-hatred that allows White Genocide? Wonderful interview with Jean Raspail, author of “Camp of the Saints”

Let’s get initials on these to display them on the White House’s website!
We tell Trump: “Defund refugee resettlement agencies”