White People Must Constantly Apologize for their Whiteness

White Self Hatred is SICK!

In a brilliantly written article by Brendan O’Neill posted on The Spectator on June 9th, 2018, Brendan explains how White Self Hatred is SICK!

Written by Brendan O’Neill for The Spectator – https://www.spectator.co.uk/2018/06/white-fright/

In the freakish universe of identity politics, there’s no creature sadder than the self-hating white person. All it takes for these saps to be engulfed by existential angst is a glimpse in the mirror. Or a shiny shop window. And there it is, looking back at them: their pasty pallor, their bleached features, a grim reminder that they were born and remain marked with the original sin of whiteness.

You can spot a white self-hater from miles off. They always look stressed out — being a member of literally the worst race that ever existed will do that to you. They might sport a Black Lives Matter badge, but they’ll rip it off faster than you can say ‘whitesplaining’ if a black person tells them to stop appropriating his politics.

They write tweets that begin with ‘Dear White People…’ and go on to list all the things white folks must stop doing: wearing dreadlocks, eating jerk chicken, asking black people about their hair. These are ‘microaggressions’. It is proof of whitey’s inherited imperial arrogance that he thinks he can steal black people’s culture and taunt them with queries about where they got their hair cut as if he was still ‘masta’.

And they’re forever checking their privilege. This is what all good honkies must do. It’s a 21st-century version of self-flagellation. Only instead of beating themselves across the back with nettles, these self-race-baiters attend things like ‘The White Privilege Conference’ (that’s a real thing in the US), to gab about such matters as ‘How to Collectively Heal the Cycle of White Supremacy’. I think I’d rather the nettles.

There was an outburst of this bizarro racial self-hatred in Australia last week.

When Meanjin, the literary quarterly, defaced its logo by turning the ‘Me’ bit into ‘MeToo’ and scribbling out the rest, all hell broke loose. Well, Twitter went into meltdown. 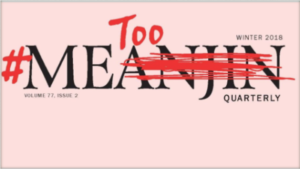 ‘Meanjin’, you see, is the Turrbal word for the land that became Brisbane. So these literary luvvies were erasing an Aboriginal slogan to make way for a feminist one, unwittingly opening a Pandora’s Box of identitarian bitching and competitive grievance. It was virtue-signalling gone wrong — hilariously wrong — with Meanjin’s people saying, ‘Look at us and how much we care about wimmin!’, only for the Twitterati to turn around and say, ‘Guys, why do you hate the First Nations?’

It didn’t take long for Meanjin’s editorial staff to come up with an explanation for their heinous act of graphic-design genocide — it was their whiteness that made them do it! Of course it was. Bloody whiteness. Always causing trouble.

So Meanjin editor Jonathan Green bowed and scraped before Twitter’s kangaroo court (no linguistic violence intended by my use of the word kangaroo). He pleaded that his ‘casual obliteration of a proud Indigenous word’ was a ‘reminder of my privilege’ and how ‘blind’ that privilege has made him to other people’s suffering. He means his white privilege, naturally, that black mark — agh — all white people bear.

Two of the pained white ladies who have articles in the MeToo Meanjin — Clementine Ford and Anna Spargo-Ryan  — went one better than Green on the back-whipping front. They issued a statement acknowledging ‘the deep hurt’ caused by the cover (‘to seven people on Twitter’, they could have added, but didn’t).

‘As white women’, they continued, really trotting out today’s fashionable racial inferiority complex, ‘we want to recognise that this [cover] is precisely part of the ongoing trauma caused by whiteness in this country’.

They said they would donate their Meanjin fee to a charity that works with Aboriginal women. Let’s call this what it is: a Catholic-style indulgence, the offering of money to reduce the amount of punishment one must undergo for one’s sin. Crikey, these people are now doing actual penance as part of their grovelling apologetics for their skin colour.

If Meanjin’s editorial staff had a single funny bone between them — which they don’t: humour is anathema to these agonised apologisers for historic hurt — they’d deface the next issue so that the ‘Me’ in ‘Meanjin’ became ‘Mea culpa’ and devote the whole bloody thing to pretend-apologising for the ridiculous notion that drawing a line through a word is a crime against humanity. I mean, seriously, how low does your opinion of Aboriginal people have to be for you to believe they will be mortally mentally wounded by the editorial decisions of a journal read by some university professors and the Melbourne macchiato set?

This is what happens when you think hyper-racially, as the Left now does, in alarming contrast to earlier leftists who said ‘Let’s be colour-blind, guys’ — you resuscitate racial stereotypes. It’s one of the great ironies of white self-loathing: in positing whiteness as all-powerful, even trauma-inducing, and black people as bundles of nerves liable to feel ‘deep hurt’ over a magazine cover, this poisonous PC creed actually rehabilitates the old skewed relationship between whites and blacks. Whites are the adults and so must always watch their words, especially around blacks, who are apparently the children: easily harmed by off-colour comments. How grotesque.

Ford and Spargo-Ryan don’t realise that it isn’t their writing for the MeToo Meanjin that makes them appear racist — it’s their presumption of fragility on the part of Aboriginal women, and their belief that they, as upstanding white women, must throw cash at these Aboriginal women as compensation for their psychic pain. The racism was in their apologism, not in Meanjin.

This small, awful affair reveals that white self-loathing has actually become a highly coveted accessory among PC whites. This is the weird thing about anti-white white people: there’s a boastfulness to their self-flagellation. They want as many people as possible to see just how much they hate their accidental racial make-up. And that’s because this white shame is in fact a new version of white pride. These people are signalling to the world that they are ‘good’ whites: aware, switched-on, not like those other whites, the uncouth, uneducated ones. They beat themselves up, yes, but to the narcissistic end of making a fat public spectacle of their heightened sensitivity.

So they demean blacks by depicting them as permanent victims, and they divide whites into Good and Bad. Can identity politics get any nastier?