In early March an event called “Culture Galore” was held to celebrate the “diverse” cultures whites are being forced to assimilate with in New Zealand.

The billboards for the event showed an Asian woman dressed in full traditional attire.

The details on the website for the event stated the following:

“Culture Galore celebrates our city’s diversity with food, art, crafts and music and dance performances from more than 80 cultures who call Christchurch home.”

We are seeing this across ALL White Countries, where any celebration of White people and our unique achievements is labeled “racist”.

We are constantly forced to profess our own self hatred and, if we don’t, we will be labeled with anti-white Hate words like “racist”, “Nazi” and “white supremacist”.

Using stickers to oppose this attack on White people is an effective way to have our message heard and to force the conversation on what is taking place: White Genocide. 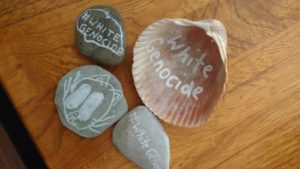 ALL white countries are being flooded with millions of non-white 3rd worlders. We are being FORCED to assimilate and any dissent from this proposition is silenced.

In a proposition nation if you dare speak out against the proposition, which is the program of “diversity”and “multiculturalism” taking place in ALL White countries, you will be harassed and physically threatened; you will lose your job and have your career destroyed. You can even be thrown in prison. 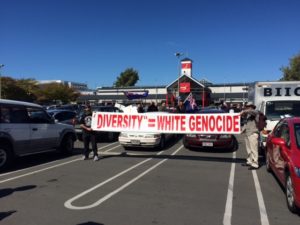 Because of the constant censorship pro-whites are subjected to, we must find ways to get our message out any way we can. We can do this online, in comment sections, in the streets with stickers and signs or on the airwaves. Get creative! There are endless ways to get the message out about White Genocide!

Grab some stickers, flyers, banners or yard signs from our FWG Shop and start forcing the conversation in your local area. 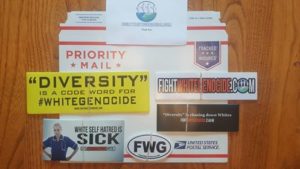 The goal: Get the media to report on it. Get people talking about it. Get the message repeated that this IS White Genocide.

We encourage all Pro-White dissidents to: GET OUT – GET ACTIVE – GET PICTURES of your activism Fighting White Genocide just like the FWG activists in New Zealand!