National Geographic offers readers another “Feel Good about White Genocide” article, “The New Europeans,” which alternately pours white guilt over the reader, and then gives him feel-good tales of individual whites (Germans, in this case) welcoming with open arms and open hearts the hordes of non-whites that anti-whites are letting into Europe.

Superficially, the article is a balanced look at Germany’s current immigrant situation. But like so much discussion about almost everything in the white world for the past half century, in every other paragraph the story is mixed with a perspective on WWII that anti-whites offer relentlessly as a justification for White Genocide.

In the first paragraph of “The New Europeans,” National Geographic deploys today’s most popular anti-white hate slur twice, to immediately arouse the white reader to sufficient white self-hatred that he will join Nat Geo in its exaltation that White Genocide is on the march in Europe.

A few comments on a few quotes from the article:

Überfremdung, or “overforeignization.” It’s the fear that home will become unrecognizable.

Or the fear that there won’t be any whites left to recognize “home” or not recognize it.

Can Germans really grow out of their heavy past to become a Willkommenskultur—a culture that welcomes others? If so…there might be hope for us all.

Anti-whites hope for a future with no white children.

[A town meeting discusses a proposed large refugee transit facility in its town]:

“The fears were in the air, but no one dared get up and say, I’m afraid; I don’t want this! No one, wanted ‘to be sent to the Nazi corner.'”

Whites are battered into submission with the anti-whites’ “Nazi” club, whether anti-whites wield the club in silence as in that meeting, or swing it openly while screaming the slur over and over.

What’s been more surprising is how many Germans have chosen to invest personally in helping the refugees.

Not surprising at all. Supporting White Genocide is whites’ road to social acceptance and imagined moral redemption. 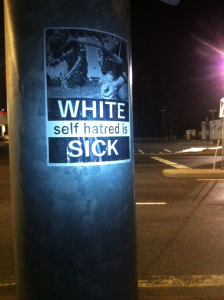 “We came as workers, and as workers we’re integrated, but not as neighbors and fellow citizens.”

Germany has learned from the experience with Turks and other immigrants. Over the past 16 years it has relaxed its citizenship laws.

Or maybe there’s not.

Her secretary in Berlin had been groped at the train station by a man she “could tell” was a refugee. Her hairdresser’s son in Frankfurt was one of only two native Germans in his elementary school class. A CDU staffer there said that gangs of immigrants walk down the main shopping street belching in people’s faces. “My goodness,” Steinbach said. “What is it all leading to?”

[Volker Damm, a retired teacher now tutoring at a school for refugee boys in Rotenburg, is described as becoming tearful while speaking of Germans’ willingness to help refugees]:

“It’s the first time in my life that I can say I’m proud of Germany.”

Translation: “I’m so full of white self-hatred that it makes me proud to help destroy my country and destroy my people!”

With constant repetition of anti-white propaganda, and with laws that prohibit free speech for pro-whites, European anti-whites have convinced whites that they are so evil that only White Genocide will redeem them.