DONATE
Blog
Home 2018 May 10 Blog “How does this discredit anti-whitism?”
info@fightwhitegenocide.com

“How does this discredit anti-whitism?”

Count the number of letters available on this traffic sign that was hacked in Arizona, and tell me if you can think of any phrase, any phrase at all (surely there must be some phrase!) that the hacker could have chosen that would do a better job of discrediting anti-whitism: 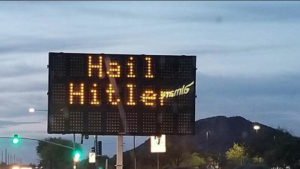 Of course almost any phrase would have done a better job of discrediting anti-whitism. The hacker chose a phrase that will strengthen the anti-whitism of most viewers.

The phrase that I consider somewhat better (I can’t help being weakly sarcastic in almost every sentence, since this action was so lame IMO) is in a footnote below.*

Or maybe the hacker is one of that tiny, meme-insensitive, media-celebrated number who insist that the best way to awaken whites to White Genocide is to first awaken them to a rosier view of Mr. H.

Some messages do harm rather than good.

Here are the messages that do good:

If your eyes are open, you can see White Genocide taking place right in front of your face year by year. Turn your skills and abilities to saving your race.

[Don’t construe this article as support of hacking traffic signs.]