Recently a group by the name “PDX Billboard Project “ erected 25 anti-white billboards in the Portland, OR area. The billboards were paid for by Portland Equity in Action.

The purpose of these billboards is to specifically target White people for demoralization. One of the billboards read “Portland… is your white fragility showing?”

The answer to this question: Any group would be considered “fragile” when they are being subjected to Genocide!

In a response to these anti-white billboards FWG contacted Pacific Outdoor Advertising requesting a billboard to display our own social message:

We at Fight White Genocide are a human rights organization interested in leasing one of your billboards.

You and I both know that the ONLY reason for those recent billboards in Portland is to promote white self-hatred, so that white people will be demoralized into accepting the genocidal conditions of mass non-white immigration and forced assimilation that are being imposed upon them worldwide. Indians have India, Chinese have China, blacks have 50+ countries and practically a whole continent, yet whites are being denied their basic human right to homelands and to self-determination globally. If you are willing to put up billboards which support genocide, you certainly cannot have any objection to putting up billboards which oppose genocide. If people promoting genocide are allowed a platform, then people opposing genocide must be allowed a platform also.

Attached is the design we would like to use. 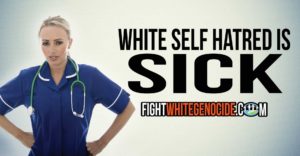 We look forward to working with you.

We have not received a response from Pacific Outdoor Advertising, even after a follow up email. We are getting silence.

It is clear Pacific Outdoor Advertising is an anti-white organization only willing to give voice to one side of this discussion. Any dissent from the anti-white narrative will not be allowed.

How can there be an open discussion on race in this country when white people are silenced from expressing what is taking place?

White people are being chased down with “diversity”. We are being forced to accept MILLIONS of non-white 3rd worlders and assimilate with them. Assimilation is Genocide.

But if we dare speak this obvious truth about the ongoing program of Genocide against Our race, we will be labeled with anti-white hate words, our careers destroyed and families threatened.

Organizations like Pacific Outdoor Advertising are enabling and promoting White hatred, while obstructing any opposition to it.

They are complicit in this program of White Genocide.