How can you tell when an anti-white is carrying out White Genocide?

“We will not condone hatred and bigotry…we live in a very diverse society, it is getting more diverse every day. It is that diverse society that makes this country great! And as long as I’m governor I will make sure that we’re inclusive, that we welcome people to the Commonwealth of Virginia. Our lights will be on! Our doors will be open!”

“Our doors will be open!” indeed. What a sweet peach this dude is.

But he’s not anti-white enough for the more-anti-white-than-thou demonstrators who interrupted his speech and caused him to be removed from the stage briefly by his security detail, as seen near the beginning of the video. You see, Ralph Northam wasn’t always a White Genocide boy. The demonstrators were protesting an earlier promise by him that he would veto any bill that allowed sanctuary cities for illegal aliens in Virginia!

Confused? There’s more. Northam had made that promise despite the fact that as Lt. Governor he had once cast a tie-breaking vote in the Virginia legislature to defeat a bill that prohibited sanctuary cities!

Anti-white Governor Northam can apparently be counted on to zig-zag a middle course between full-press White Genocide and moderate White Genocide. 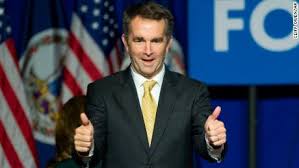 Thumbs up for White Genocide!