Battle of the genocides: Columbus Day vs. Indigenous Peoples Day

“Welcome to our home! Take the master bedroom! Marry our daughters! Blend us out of existence!”

In the long history of destructions of peoples by the arrival of other peoples, only the white race recently, conditioned by anti-whites to accept its own genocide, has welcomed hordes of invading foreigners.

The American Indians resisted our early settlers as best their nature allowed. Far-seeing chiefs like Crazy Horse and Tecumseh saw that they were in a fight to the death, but they couldn’t dissuade their warriors from continuing to just raid and count coups and take scalps.

BUGSers who have found pro-Whites slow to saturate the white world with the Mantra and with our Mantra memes may feel some sympathy for Crazy Horse and Tecumseh’s frustration in attempting to redirect the energies of their warriors.

But rather than serving as a caution to whites today, the fate of American Indians under the pressure of European settlers has now been reduced to just one more propaganda item in today’s project to remove whites from the face of the earth.

Today in cities across the U.S., statues of Columbus are being vandalized as part of the never-ending campaign to keep whites self-hating and subdued so that we will not resist White Genocide!

But whites are beginning to wake up, and isn’t it beautiful!

Readers, you can help.

And remember (and paste),

Diversity is a code word for White Genocide! 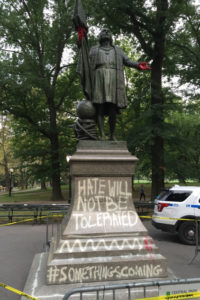