The following is a communique we have sent to staffers of the Republican members of the House Judiciary Committee. The purpose is to make our pro-white case and also in the hope they may use some of our talking points. We also sent all committee members the US law on genocide (18 U.S.C. § 1091 ) and Bob Whitaker’s mantra.

“Once a government is committed to the principle of silencing the voice of opposition, it has only one way to go, and that is down the path of increasingly repressive measures, until it becomes a source of terror to all its citizens and creates a country where everyone lives in fear.” ~Harry S Truman

During the upcoming Holy Inquisition of the Religion of Political Correctness to be held April 9, 2019 in the House Judiciary Committee, your white voters will be watching to see whether you advocate or support any action which singles them out for censorship, whether done by you directly or indirectly through social media as a result of federal legislation. If you do, why should any of them vote for you?

Pro-whites have already been convicted without ever having a chance to defend themselves in court. They never invited anyone to testify on behalf of white people. This is just a sentencing hearing. But the anti-whites never made the case as to why pro-white advocacy is uniquely evil.

With that in mind, please consider the following:

Many political positions have violent advocates.

If you outlawed discussion of anything that had been horribly misused historically, anyone who talked about the distribution of income would be in prison. 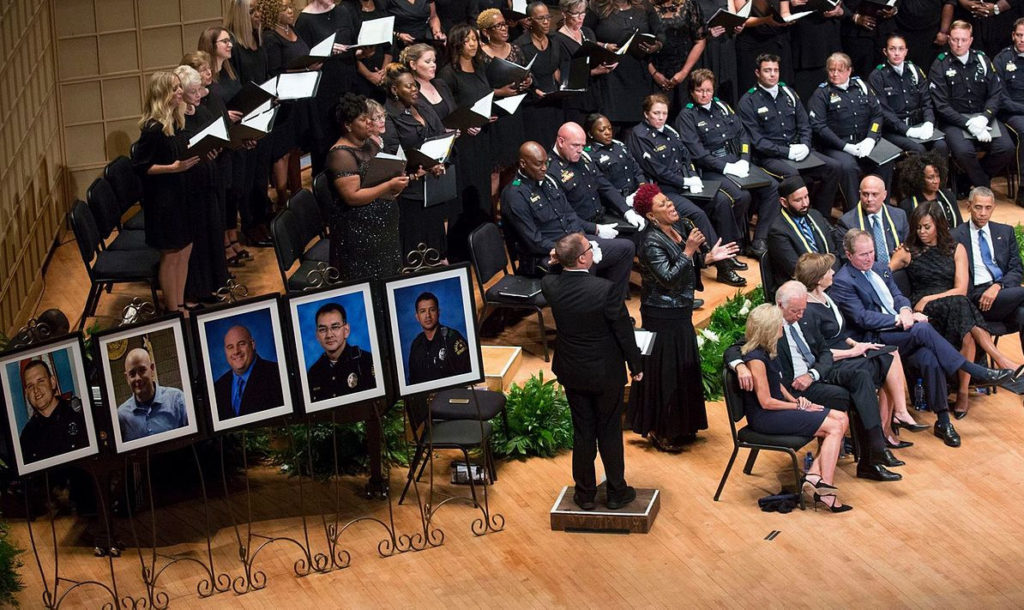 Stalin used the question of the distribution of income to kill tens of millions, and Mao Tse Tung killed even more. Would it be all right then for a gang of thugs to show up and riot every time someone came to the campus to discuss income redistribution?

On July 7, 2016, in Dallas, Texas, Micah Xavier Johnson murdered five police officers and injured nine others. According to Dallas police chief David Brown, Johnson “stated he wanted to kill white people, especially white officers.” In an interview with Wolf Blitzer July 8, 2016, Hillary Clinton said “I’m going to be talking to white people. I think we’re the ones who have to start listening to the legitimate cries that are coming from our African-American fellow citizens.” There were no calls for censorship of black lives matter or any political position they favor. There were no congressional hearings on the effect of anti-white speech inciting violence against white people. No one is saying we have to listen to the legitimate cries of white people.

On June 14, 2017, in Alexandria, Virginia, James Thomas Hodgkinson Shot Congressman Steve Scalise and also shot Matt Mika, Crystal Griner, and Zack Barth. Hodgkinson was a Democrat who was, according the Virginia Attorney General “fueled by rage against Republican legislators”. There were no calls for censorship of Democrats or any political position they favor. There were no congressional hearings on the effect of speech inciting violence against Republicans or conservatives.

Why is only pro-white advocacy being singled out for censorship? 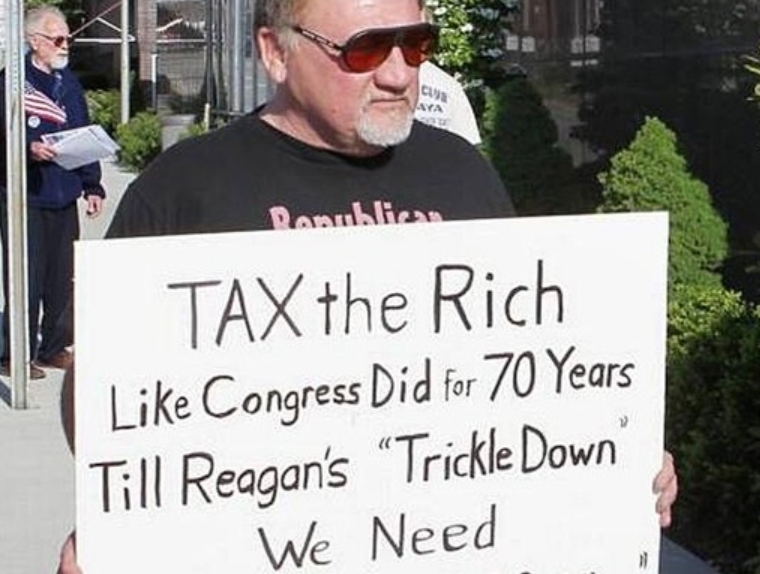 at universities due to threats of violence from leftist thugs. The threat of violence ALWAYS comes from the left. Universities are engaging in political censorship at taxpayer expense in violation of their tax-deductible status. They are censoring YOUR constituents. They are making it harder for YOU to get elected. Why don’t you hold a hearing on university censorship?

Tyranny is free speech with exceptions.

Freedom of speech is always suppressed with the excuse that it might cause trouble. Tyrannies like Nazism and Communism always used somebody else’s totalitarianism to justify their own.
In fact, no suppression of free speech has EVER used anything but screaming some label to justify itself.

If no one stands up for the right of a person to openly talk about the disappearance of the white race we see going on around us, how long will it be before Political Correctness condemns the discussion of other issues?

Stalin’s Constitution of 1936 declared more freedom than did any US constitution, state or Federal. But those announced freedoms were limited by one small problem: No one could exercise them if they would interfere with Purposes of the State.

Alexander Solzhenitsyn wrote The Gulag Archipelago about his nightmare years in Soviet Death Camps. He was sent to the Gulag for writing private letters that were critical of Stalin. It was one of tens of millions of cases where Soviet Freedom of Speech had an exception.

By that definition, everybody has free speech. Slaves were permitted to say anything they wished, so long as it did not interfere with the will of their masters.

As with Stalin, the so-called “right” to free speech is now simply the right to speak if it doesn’t cause trouble.

Every established religion and tyranny in history had free speech according to those criteria. The Medieval Church, slaveholders and Mao-Tse Tung all agreed that they allowed free speech, with certain exceptions: 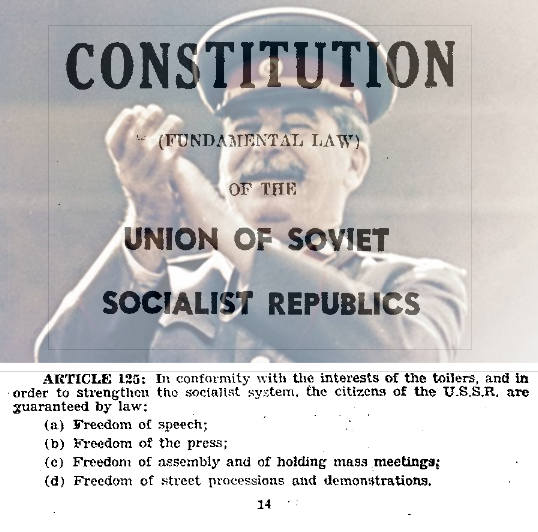 1) Heresy was not free speech;
2) Free speech was all right if it didn’t make trouble; or
3) Stand in the way of the purposes of society.

Those three exceptions are all accepted by America today, by the left and by the respectable right.

“If all printers were determined not to print anything till they were sure it would offend nobody, there would be very little printed.” ~ Benjamin Franklin

There is currently a global genocide of the white race.

Genocide is defined under UN Resolution 260 as any attempt to eliminate a group by any means. Every white country is being flooded and force assimilated BY LAW with millions and millions of non-whites. This is gen 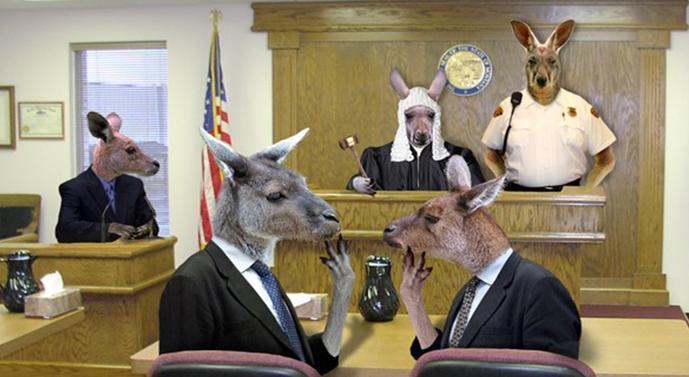 Article II
In the present Convention, genocide means any of the following acts committed with intent to destroy, in whole or in part, a national, ethnical, racial or religious group, as such:
a) Killing members of the group:
b) Causing serious bodily or mental harm to members of the group;
c) Deliberately inflicting on the group conditions of life calculated to bring about its physical destruction in whole or in part;
d) Imposing measures intended to prevent births within the group;
e) Forcibly transferring children of the group to another group.

The United States Senate ratified the Convention on the Prevention and Punishment of the Crime of Genocide on February 19, 1986. Enabling legislation to enforce this treaty has also been voted into law, namely 18 U.S.C. § 1091 signed into law by President Ronald Reagan as the Genocide Convention Implementation Act of 1987 on November 4, 1988. Pertinent parts:

18 U.S. Code § 1091 – Genocide
(a)Basic Offense.—Whoever, whether in time of peace or in time of war and with the specific intent to destroy, in whole or in substantial part, a national, ethnic, racial, or religious group as such—
(1) kills members of that group;
(2) causes serious bodily injury to members of that group;
(3) causes the permanent impairment of the mental faculties of members of the group through drugs, torture, or similar techniques;
(4) subjects the group to conditions of life that are intended to cause the physical destruction of the group in whole or in part;
(5) imposes measures intended to prevent births within the group; or
(6) transfers by force children of the group to another group;

The United States not only has an obligation not to engage in the crime of genocide, it is obligated to take steps to prevent genocide.

You can’t be a separatist and a supremacist. You can’t supremacize people who are NOT THERE.

Self-determination is not supremacy.

If there’s no such thing as white people, what’s white supremacy or white privilege?

We see that every excuse given for singling out pro-white advocacy for censorship is spurious. Whites, in fact, are under attack globally. They are being subjected to harassment, censorship and violent assaults. They are the only group being denied the basic rights to homelands and self-determination. They have every right to speak out against their genocide.

In 1799, the Federalist Party passed the Alien and Sedition acts which largely outlawed any criticism of government policy, even if the criticism was true. In 1800, the people voted them out and soon the Federalist Party ceased to exist. The PEOPLE, not the courts, got rid of that whorish doctrine, “The truth is no defense” in America.

The Team at Fight White Genocide

About Fight White Genocide:
We’re human rights activists calling attention to the crime of genocide being committed against the white race. The crime of genocide was codified under international law by General Assembly Resolution 260 (adopted Dec 9, 1948 in effect Jan 12, 1951), The Convention on the Prevention and Punishment of the Crime of Genocide. 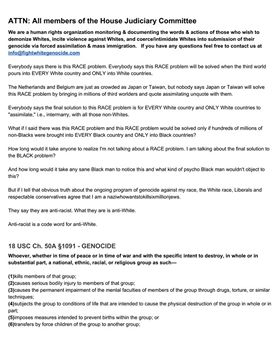 Sent to all members.

We are against white supremacy in all its forms, including the notion that white people have a moral obligation to take care of every race but their own.

We unequivocally condemn, denounce and disavow the use of violence to achieve political ends.