activism, No Free Speech for Pro-whites, Religion of Political Correctness, War On Whites

Petitions at Change.org are active and can be signed for one whole year.

Like our White House petitions, Change.org is a venue for spreading our Stop White Genocide memes into the mainstream.

You can sign this and spread it to increase its impact. 5 signatures make it visible to “the entire Change.org community.”

The space for public debate is now controlled by a few huge anti-white companies.

Those companies pretend that the world’s racial problems will be solved when the third world pours into EVERY white country and ONLY into white countries, and when those white countries “assimilate,” i.e. intermarry with all those non-whites.

Anti-whites hypocritically call blending whites out of existence “diversity,” their code term for chasing down the last white person.

They preach blending away whites as a “white genocide conspiracy theory,” while they silence pro-whites with social media bans and refusals of service by credit card companies and other payment platforms.

Mr. President, direct the DOJ to protect the right of whites to speak for a future with white children.

Prosecute tech companies whose deplatforming of pro-whites allows only anti-whites to use the term “white genocide.” 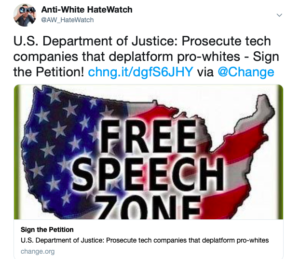