White self-hatred is being taught to whites in school today, to eliminate resistance to the White Genocide that’s being carried out by massive third world immigration and forced assimilation in white countries world wide.

Today’s successful conditioning of a race to hate itself is a very bizarre phenomenon that’s probably never been seen before in the history of the world.

At the individual level, white self-hatred is an invasive weed that takes over the whole personality. At a Thanksgiving dinner yesterday, I listened with wonder to accounts of men scurrying to their websites to confess, with tearful contrition, all their acts of  harassing women* that they hadn’t given a thought to before.

Respect for women obviously is good. Men displaying masochistic self-abasement to atone for disrespect is bad.

It’s natural, healthy and moral for a man to feel shame and to apologize if he’s made a reasonable woman feel ill-treated. But the institutionalization of shame as a permanent condition for white men, and also for white women, with unending displays of self-abasement being required, is just white self-hatred, imposed on whites by anti-whites to block whites’ opposition to White Genocide.

White self-hatred is a weed that anti-whites planted in fertile soil (much of which they had prepared), and today they tend that weed lovingly and strive to deepen its roots at every opportunity. 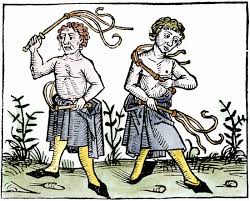 “Are we having fun yet?”

But many whites today are shucking off white self-hatred. The best thing about President Trump (some readers will say it’s the only good thing) is that Trump does not model white self-hatred. However undignified his mode of doing it, Trump models the opposite of white self-hatred, as much as any politician could today and remain in office.

THAT is the main reason Trump is hated.

That’s all folks. Apologies if the title of this article promised more excitement than was delivered.

*To readers of this article at a later time: the U.S. is presently in the middle of a psychic cleansing/national hysteria (take your pick) concerning sexual harassment of women.

California NAACP head demands new National Anthem, “Oh say can you see, the racism in me”
Being clear on the core of White Genocide