War On Whites, You're Just Anti-white

Just hours after the mass shooting in Las Vegas, “Professor” George Ciccariello, the professor who declared all he wanted for Christmas was white genocide, stated that the shooting was due to white people claiming victimization and that “White people and men are told that they are entitled to everything. This is what happens when they (white people) don’t get what they want. The narrative of white victimization has been gradually built over the past 40 years.” – George Ciccariello 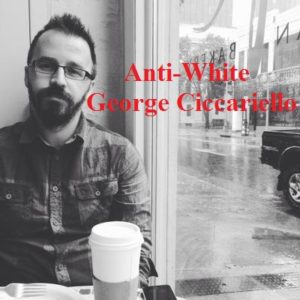 Without a shred of evidence to support his claim, this anti-white professor believes that a guy with a non-white girlfriend shoots at an overwhelmingly white crowd of likely Trump supporters because he thinks whites are victims -???? Totally makes sense, eh?

What Ciccariello has right though, white people aren’t getting what we want, which is a homeland that isn’t being flooded with millions of non-whites, and we are victims, victims of the largest genocide in history – White Genocide.

But unlike the picture Ciccariello is painting of white people, pro-whites aren’t playing the victim, we are taking formation and fighting back against the anti-white narrative by using effective propaganda and the more success we are having at the propaganda war, the more the left is erupting. What we’re seeing now is the last throes of death from the left and from political correctness before the collapse.

Ciccariello is nothing more than a vile anti-white. What professor would ever get away with saying the things Ciccariello has said about any other race? I am happy to hear Drexel University is finally taking action against this white hating professor.

Below is a letter written by Bob Whitaker to Mr Ciccariello back in February after he made his first tweet about wishing for White Genocide:

In a statement you released regarding your tweet that called for the genocide of an entire race, you stated “White supremacy is on the rise, and we must fight it by any means. In that fight, universities will need to choose whether they are on the side of free expression and academic debate, or on the side of the racist mob.”

What is this independent industry you refer to as “universities”?

You seem too use this collective term “universities” as denoting a single self-financing institution that’s charged with taking certain political stands.

I have heard this sort of collective referred to as “the intellectuals” in the ravings of self styled Marxists. You declare that you are a Communist. I was in those “Communist” countries while the Iron Curtain still stood.

Every single self-described “Communist” country maintained a guarded wall around it. Anyone who tried to get out of such a Communist country, your ideal country, was shot.

“Communists” talk about how they build Workers’ Paradises, and no Communist ever explains why EVERY Communist country is, in Plain English, a prison. No one at any university ever asks this question, Mr George Ciccariello-Maher.

Trump is attacked for wanting a wall to keep working people OUT of the United States. But it makes not the slightest difference to you Marxist intellectuals whether working people want to live IN Communist states that hold them captive. The question never comes up in your “universities” because you couldn’t care less about what real working people want.

With the EXCEPTION of your Communist states, since they have no choice, non-white populations want to live in white-skinned countries. You never try to explain this reality. If white people try your diversity and discover, for the millionth time, it is miserable, you demand that the government, ONCE AGAIN, chase the whites down with diversity, racial balancing, immigration, integration and all the other names you come up with for chasing white people down.

You are after whites. You have only one goal: that is there be no overwhelmingly WHITE country.