Portland City Council Hears Resolution Condemning White Supremacy, unanimously passing it as they were EXPECTED to

At 2pm PT on February 7th, the Portland City Council heard a Resolution condemning white supremacy and alt-right “hate” groups in the area. 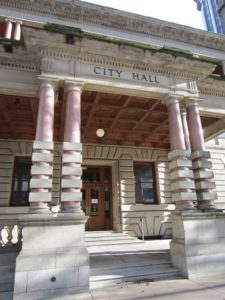 The Resolution is nothing but an Anti-White Hate resolution condemning White people.

It is a self hating Resolution, written by white people, who are self flagellating. It is SICK and childish!

On January 31st KGW News reported on the upcoming city council hearing. At the beginning of the report the news anchor states “Portland city council plans to condemn white supremacy and racism with a new resolution and every single commissioner is expected to sign it.” – https://www.youtube.com/watch?v=HrvAVcFLKdg

There can be no objection to condemning White people. It is EXPECTED! Should any of the Commissioners have voted against this Resolution, they therefore must be a “white supremacist”, Because white people can have no rights.

Everyone knows that this definition of “White supremacist” simply means a White person who has the moral integrity to not betray their own race.

Nothing angers an anti-White more than a white person who refuses to hate and betray our own kind.

This resolution is an echo of the quote from Noel Ignatiev, the professor from Harvard University that said, “The goal of abolishing the white race is on its face so desirable that some may find it hard to believe that it could incur any opposition other than from committed white supremacists”.

Like Ignatiev’s quote, this Resolution seeks to abolish the rights of white people, and how could there be any objection to it, except from committed “white supremacists”?

When Nicole Grant, a Black senior policy advisor for Portlands Mayor Ted Wheeler, introduced the resolution at the city council meeting she claimed “This resolution is not about white people. It is about all people, with a dedicated focus on those who are targeted because of their skin color,” she said. “This goes beyond public safety, and speaks to a need for a cultural shift within this city.”

What a contradiction, Nicole, this resolution is directly targeting White people because of our skin color, because we are White and we say “It’s NOT OK to be anti-white”.

But here is the simple fact of this resolution; You can not have “diversity” and freedom of speech at the same time. In a propositional multi-racial nation, speech laws must be imposed to restrict any dissent from the proposition. A major theme of that proposition is anti-whitism.

A cultural shift as Grant puts it means a shift towards hating whites, and for white people to profess their self hatred.

But we state; White self hatred is SICK!

Incidentally, how can one be a white supremacist if his crime is that he wants nothing to do with non-whites?

How can you be a white supremacist when there is nobody around but white people?

From a white survivalist viewpoint, We ask only for our own place to survive.