Ann Coulter, don’t pass over the world’s larger White Genocide when you speak of South Africa!

Anti-whites are pressing hard to flood EVERY white country and ONLY white countries with millions of third world non-whites, and to assimilate whites with those non-whites through laws and propaganda, until interbreeding blends whites out of existence or reduces whites to a small minority.

This project of genocide that hides under the cloak of “diversity” is for white countries only. Countries in Asia or Africa are allowed to remain essentially racially intact, and so the Asian, African, and other races will be preserved in their homelands after they have been used to blend the white races out of existence in white homelands.

As discussion of the South African situation grows, we will be told that we are a very long way from being subject to the brutality suffered by South African whites today.

What we won’t be told is that if that day finally arrives, and the anti-white program of White Genocide by massive immigration and forced assimilation hasn’t yet been turned back, whites will have been bred out of existence to the point that there will be only a few of us left to be butchered. 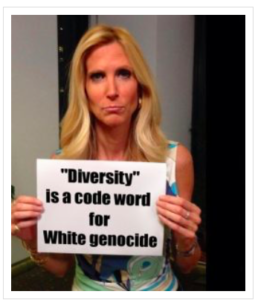 “We are witnessing a straight-out genocide [of white farmers in South Africa],” says Ann Coulter
Hungary and Viktor Orbán say “NO!” to George Soros and White Genocide!