Ironic, but of course it also makes total sense. The last thing a white traitor wants to see when he drives to work every morning is a mirror that reflects his twisted sickness back at him. 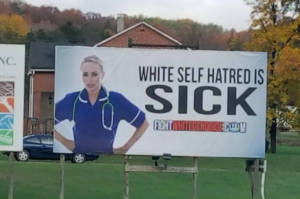 Kevin Oxenrider, a biologist employed in the Division of Natural Resources of the state of West Virginia, is a shaky customer who was so overcome by seeing his sick reflection in our mirror that he needed to pull off the road until he stopped shaking:

“This was so appauling [sic]…I literally had to pull my vehicle over and get myself together I was shaking so badly from how disgusted I was. Absolutely terrible.”

Mr. Oxenrider clearly needed to be delivered immediately to the intensive care unit of a ward for anti-white psychotics.

But instead, mounted astride his galloping anti-white psychosis, and putting the spurs to it like a demented Paul Revere from a parallel anti-white universe, Mr. Oxenrider rode furiously to his governor’s office in Charleston where he delivered his alarm that West Virginia was under siege from a billboard outside of Hanging Rock that was using free speech to oppose White Genocide.

According to articles at fightwhitegenocide.com and bigleaguepolitics.com, the owners of the billboard were not only contacted by callers urged on by Oxenrider, but were also contacted by the governor’s office directly, and feared that if they resisted, Oxenrider might use his influence to cause their businesses issues with permits and other matters. So they removed the billboard and returned the rental fee to fightwhitegenocide.com. 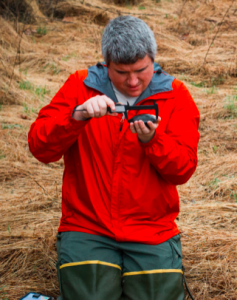 Oxenrider’s insane first tweet makes me wonder if he’s married to a non-white and has mixed children, since that’s sometimes contributed to similar extreme reactions against our simple opposition to White Genocide.

That’s worth a moment’s diversion, since intermarriage per se is not the problem for us. The problem is that the flooding of our countries with third worlders, and the laws and propaganda that impel our assimilation with that large number of third worlders once they’ve arrived, raise the frequency of intermarriage to the point that we will be reduced to very small minorities in our countries or eventually blended out of existence altogether.

And let’s note that this is not “voluntary,” since we never voted to have our countries flooded with the third world, nor did we vote for the laws and propaganda systems that press our assimilation with that third world.

If whites were allowed our own homelands as the other races of the world are allowed, and we were rid of laws that force assimilation and rid of anti-white propaganda that causes whites to hate themselves, intermarriage would occur at such a low rate that it would be inconsequential for our race as a whole, as was the case before the current madness was fastened on us.

Now you understand the broad scope of White Genocide if you didn’t before, and that also concludes our exciting narrative of Mr. Oxenrider and his strange but much-too-common illness.

Mr. Oxenrider, you are a white self-hater and you are SICK!!! 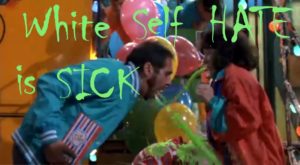