Dalhousie University in Nova Scotia, Canada tells student leader that White folk must not be demeaned as White Genocide is carried out 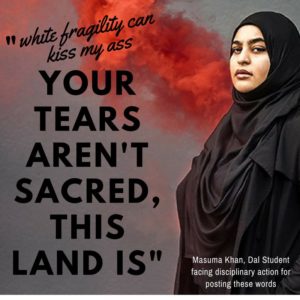 Unlearn 150!
We recognize that Canada Day and the Canada 150 celebrations are an act of ongoing colonialism that glorifies continued theft from, and disenfranchisement of, the indigenous peoples of Turtle Island (Canada).
Here in K’jipuktuk (Halifax) we study work and live on unceded and unsurrendered Mi’kmaq territory. Mi’kma’ki is the traditional territory of the Mi’Kmaq people, who have lived on this land for over 13,000 years.
We stand in solidarity with indigenous students and communities. We are committed to challenging and unlearning the narrative of Canada 150 and decolonizing education.
#Unlearn150

Miss Khan was so distressed by complaints to that statement that she protested in a now removed Facebook post:

“At this point, f–k you all. I stand by the motion I put forward. I stand by Indigenous students. … Be proud of this country? For what, over 400 years of genocide? #unlearn150 #whitefragilitycankissmyass #yourwhitetearsarentsacredthislandis” – Masuma Khan

After receiving a formal complaint about this post from white history graduate student Michael Smith, Dalhousie University’s elegant vice-provost of student affairs Arig al Shaibah (who formerly worked for non-profit immigrant settlement organizations) concluded that Ms. Khan had violated the University’s code of student conduct which prohibits “unwelcome or persistent conduct that the student knows, or ought to know, would cause another person to feel demeaned, intimidated or harassed.”

The university’s statement said that it was “understandable that the Complainant who identified as White (among other identities) disclosed feeling targeted on the basis of their White identity.” 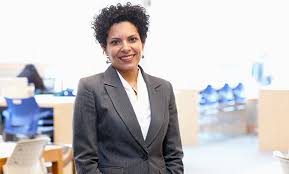 Miss Khan is represented by attorney Nasha Nijhawan, who is a graduate of Dalhousie Law School where she was awarded the Muriel Duckworth Award for raising consciousness of feminism in the legal community. “Nasha is committed to advocacy projects focusing on equality,” according to Ms. Nijhawan’s legal site. 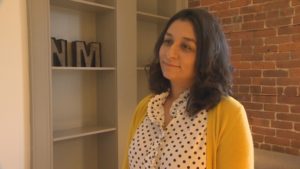 The university’s senate discipline committee is expected to review the complaint against Khan in November or December.

Michael Smith, the graduate history student who filed the complaint against Miss Khan, wrote an Op Ed in Canada’s National Post in which he said:

Canada is a welcoming country. We are blessed to be one of the most tolerant and multicultural nations in the world, where all individuals are free to pursue their dreams, regardless of their backgrounds. It is because of this reputation that millions of individuals have fought to come here…

Canadians have much to be proud of, and plenty to celebrate on this 150th year…I am proud to be a part of what the NCNS [Native Council of Nova Scotia] calls a great Federation of the Peoples of Canada. I am proud to be Canadian.

That may be the saddest part of the whole affair. Canada’s “hate” speech prohibitions are so strict that Whites who might otherwise protest the ongoing White Genocide in their country can only speak within the parameters of their country’s White Genocide program.

We extend our fellowship and best wishes to our white brothers and sisters in Canada!