WHEREAS pro-whites had organized a peaceful protest to be held in Emancipation Park, Charlottesville, VA on August 11-12, 2017 to express their political opinions the right to which is guaranteed in our Constitution; 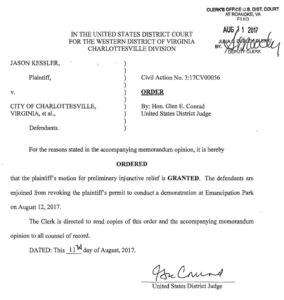 the legal assistance of the Virginia American Civil Liberties Union (ACLU), a federal judge had affirmed the right to hold this rally at Emancipation Park after local authorities had illegally attempted to relocate this protest;

WHEREAS anti-white terrorists (sometimes called “antifa”), many of whom were illegally wearing masks, armed with bats, at least one improvised flame-thrower, bear mace and pepper spray and other weapons and noxious substances had traveled to this protest with the purpose of violently denying the free speech rights of pro-whites;

WHEREAS the local and state police refused to do their jobs and protect citizens from these anti-white terror squads;

allow the anti-white terror squads to initiate violence as confirmed by the Virginia ACLU;

WHEREAS the state of emergency ordered by Virginia Governor Terry McAuliffe was not a reaction to events on the ground but was obviously preplanned and deliberately timed to occur before pro-whites were scheduled to speak thereby denying them their free speech rights;

WHEREAS police goons illegally dispersed this lawful, peaceful demonstration thereby denying them the right to speak and be heard;

WHEREAS any violence that did occur was the result of provocations by the anti-white terror squads and the police’s refusal to protect the safety of citizens;

WHEREAS pro-whites never go to anti-white rallies to try to violently shut down their speech;

WHEREAS anti-white terror squads have a long history of violently denying the free speech of pro-whites thereby justifying any reasonable precautions pro-whites took to defend themselves; 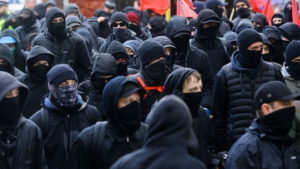 a “heckler’s veto” on pro-white and conservative speech on campuses across the nation;

WHEREAS the City of Charlottesville and the Commonwealth of Virginia violated the constitutional rights of the pro-white protesters by denying them the rights of peaceable protest and the right to free speech guaranteed by the First Amendment to the Constitution;

WHEREAS the United States has ratified United Nations General Assembly Resolution 260 “Prevention and Punishment of the Crime of Genocide” and passed a law the “Genocide Convention Implementation Act of 1987” to implement the provisions of this treaty;

WHEREAS white genocide through mass non-white immigration combined with forced assimilation is being carried on in any area anti-whites in power deem “too white” and this constitutes genocide under the United Nations Genocide Convention;

WHEREAS one of the policies used to implement white genocide is to deny anyone the right to speak out against it.

All people of good conscience opposed to genocide and dedicated to Constitutional rights for ALL US citizens therefore state the following demands:

WE DEMAND that any attempt to blame pro-whites for violence, death or injury they did not cause be regarded as the libel or slander that it is;

WE DEMAND that any attempt to say pro-whites initiated violence when that was not the case be regarded as the libel or slander that it is;

WE DEMAND that any attempt to say that pro-whites taking reasonable precautions to defend themselves against groups with a history of violence is in and of itself an initiation of violence or proves intent to commit any crime be regarded as the libel or slander that it is;

WE DEMAND that all members of Congress affirm that the First Amendment guarantees the right of free speech and peaceable assembly to ALL US citizens, not just those engaging in Politically Correct speech;

WE DEMAND that all members of Congress affirm that all US Citizens are to be regarded by the government as innocent until proven guilty in a court of law of any crime they are accused of;

WE DEMAND that the Trump administration pledge that it will not attempt any measures which would violate the First Amendment rights of pro-whites;

WE DEMAND that The City of Charlottesville and the Commonwealth of Virginia be prosecuted by the federal government for violating the constitutional rights of pro-whites;

WE DEMAND that the federal government investigate the organizers and members of the anti-white terror squads commonly called “antifa” for any criminal acts they have engaged in and that they be brought to justice;

WE DEMAND that ALL federal funds for universities, colleges and all other institutes of learning which illegally censor speech be immediately cut off;

WE DEMAND that the Trump administration uphold its treaty obligations and US law to oppose genocide by opposing white genocide and immediately put a stop to all policies which bring about white genocide including:

c) harassing those who object to genocide