Poland Should Sue Over White Genocide

Poland has issued a report saying it can seek war reparations from Germany.

WARSAW — Poland can demand reparations from Germany for the damage and loss of life it suffered during World War II, according to a report by the Polish parliament’s research service published Monday.

“It is legitimate to claim that the Republic of Poland is entitled to compensation claims against the Federal Republic of Germany, and the contention that those claims have expired is unfounded,” the parliament’s research bureau found in a 40-page opinion delving into the enormous devastation and millions of deaths that followed Germany’s invasion of Poland on September 1, 1939. 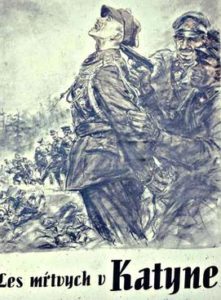 One wonders why they are not also suing Russia as the successor to the Soviet Union which invaded Poland on September 17, 1939 shortly after Germany invaded and subjected Poland to its own brutal occupation. During that occupation, the Soviets murdered 22,000 Polish military and police officers and other members of the managerial class and intelligentsia deemed subversive to the new Communist order in the infamous Katyn Woods massacre. Before the Germans expelled them in 1941, the Soviets also shipped 320,000 Polish citizens to Siberia of whom 150,000 died. Additionally, the Soviets imposed a puppet Communist regime on the Polish people for 40 years. How many Communist criminals has Poland brought to justice?

Some have speculated that the Polish demand for reparations against Germany are in retaliation for the legal action being undertaken by the European Union (EU) to try to force Poland, along with Hungary and the Czech Republic, to open their borders and let in thousands and thousands of non-white “refugees.”

Rather than trying to sue over reparations, instead Poland should sue over white genocide. The actions of the EU and most white countries imposing mass non-white immigration and forced assimilation wherever there are deemed to be too many white people unquestionably qualifies as genocide under international law. Peter Sutherland, the UN’s special representative for migration, told the House of Lords that the EU should undermine the national homogeneity of its member states. General Wesley Clark said there is no room for ethnically pure states in Europe. These people are clearly following the plan laid out by the Godfather of the EU, Richard Kalergi to force-blend white Europeans into a “Eurasian-Negroid race… similar in its appearance to the ancient Egyptians.” 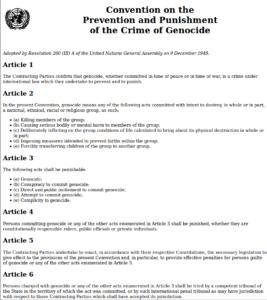 Unlike the post World War Two Nuremberg tribunals where they had to make up law as they went, in the case of white genocide the law is already on the books: United Nations General Assembly Resolution 260 Convention on the Prevention And Punishment of the Crime of Genocide. Suing over white genocide would stop the EU lawsuit absolutely dead in its tracks and might even have the added benefit of stopping the largest genocide in history. In fact, the EU lawsuit is itself more evidence of white genocide, demanding WHITE countries open their borders to mass third world invasion. There is no way a lawsuit or demand for a genocide tribunal initiated by a state as large as Poland could be ignored, especially if it were joined by Hungary and the Czech Republic.

Nazis have been gone a long time. It’s time to stop fighting the last war and start fighting the one in front of us. Our enemies don’t care if you are a Pole or a Hungarian or a German. Anti-whites in power are targeting ALL white people for elimination. The iron curtain had barely come down when anti-whites began asking “is Eastern Europe ready for immigration?” We all know that’s because they are WHITE countries. And we all know they mean NON-WHITE immigration.